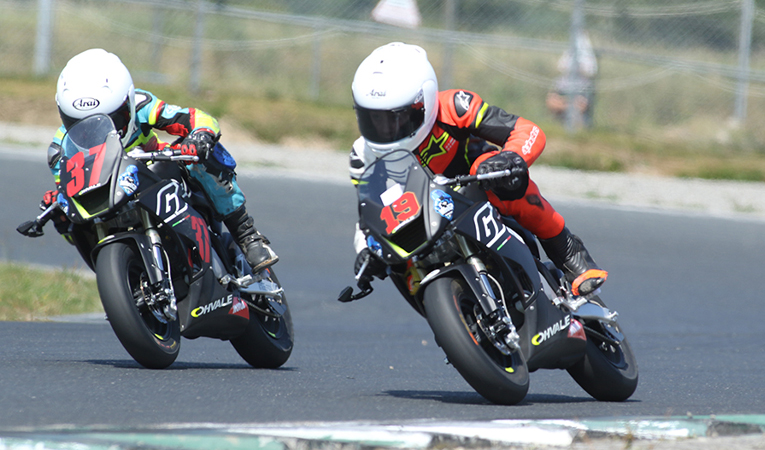 The opening rounds of the inaugural FIM MiniGP Ireland Series were some of the highlights of the weekend as the first Irish event of the new FIM and Dorna promoted World Series joined the prestigious Masters Superbike Championship at Mondello Park in County Kildare on July 24th and 25th.

The new series for ten to fourteen year old’s, racing on identical Ohvale Motorcycles, completed the first three races of its season on a specially built track which incorporated sections of the main Mondello Park National Track. The first event for the new series was a huge success and was well received by the crowd, who were the first spectators to be admitted to a Mondello Park event since 2019 due to local Covid-19 restrictions.

The first of three races took place on Saturday evening following practice and a single qualifying session and it was Armagh rider Brian Hamilton who took pole position followed by Wicklow’s Fionn Stephens and Mark Carey from Meath. Hamilton took the lead when the lights went out and was followed closely by Carey and Kildare rider Josh O’Brien, who was up from fifth on the grid. Hamilton proceeded to lead from lights to flag to take the honour of winning the first ever FIM MiniGP Ireland race, but behind him the positions were constantly changing. At the flag it was O’Brien who took second, along with fastest race lap, with Stephens right on his tail.

With the grid for Sunday’s race two, based on race one lap times, O’Brien took pole from Hamilton and O’Connell. Once again there was a titanic battle at the front, this time with four riders involved. O’Brien and Hamilton swapped the lead almost every lap and were joined by Dubliner Finnan Wherity and O’Connell. O’Brien eventually took the win following a last corner move on Hamilton to reverse Saturday’s top two. The top three crossed the line separated by a quarter of a second with Wherity taking the final podium spot and a new lap record, as O’Connell dropped away in the final couple of laps.

The final race of the weekend saw Wherity on pole from O’Connell and Hamilton, but once again it was Hamilton and O’Brien battling for the lead in the early laps. An error by O’Connell put him out of the running leaving O’Brien, Hamilton and Wherity as the top three. Once again the top two fought hard right through to lap twelve until Hamilton was forced to retire due to an issue with his brakes, leaving O’Brien to take his second victory, whilst also lowering the lap record. Wherity finished second, four seconds down on the winner, with Carey promoted to the podium by the demise of Hamilton.

Following the opening three rounds it is Josh O’Brien who leads the championship, from Finnan Wherity and Hamilton. The next event on the calendar takes the Series to Whiteriver Park kart track in County Louth, on Sunday August 8th.