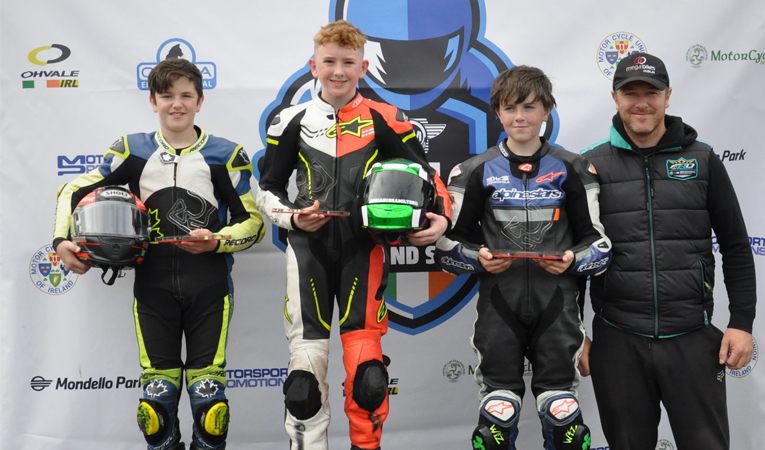 The FIM MiniGP Ireland Series continued its maiden season with its first trip to Whiteriver Park in County Louth, on Sunday August 8th, for an action packed triple header.

The new championship for 10 to 14 year olds, which is part of the FIM MiniGP World Series, contested its second event of the year, following its debut at Mondello Park two weeks earlier. The trio of races saw Brian Hamilton take two wins to Finnan Wherity’s single victory as the fourteen year old from Portadown moved into the championship lead.

Hamilton, Wherity, Josh O’Brien and Fionn O’Connell were the class of the field at the season opener, but only three of them lined up for the second round as series leader O’Brien had suffered a testing injury which ruled him out. The conditions that greeted the riders for qualifying were very different to the extreme heat experienced in Mondello Park, as the MiniGP riders had their first taste of a damp track. Dubliner Wherity topped the session with his second last lap, while Hamilton ran him close with his last flying lap of the session to end up less than a tenth of a second behind. Joining them on the front row of the grid was County Meath’s Mark Carey, who made a big step forward from Round 1.

In race one it was Hamilton who made the best start to take the lead, but he was soon caught and passed by Wherity. Wherity had a slight advantage on every lap and built a comfortable lead over the opening twelve tours before easing off for the final three to take the a six second win. Hamilton finished second, well clear of third placed Carey, with Cork rider O’Connell fourth.

Race two saw the positions at the front reversed as Hamilton lead from the off and gradually built a seven second advantage by the flag. Wherity was pushed hard early on for second place, but pulled clear of Carey in the latter stages. Wicklow’s Fionn Stephens recovered from a non-finish in race one to take fourth, when O’Connell crashed out on the second last lap.

Race three produced a repeat of the race two result, as O’Connell did not start, leaving Hamilton to take his second win of the day, and third of the season, ahead of Wherity, Carey and Stephens. Hamilton now leads the championship by a single point from Wherity and Carey with non-starter Josh O’Brien just holding on to fourth spot ahead of Stephens.

The next round of the championship will see the MiniGP riders once again join with the Masters Superbike Championship at Mondello Park on August 28th & 29th, where the riders will tackle their third different circuit layout of the season.