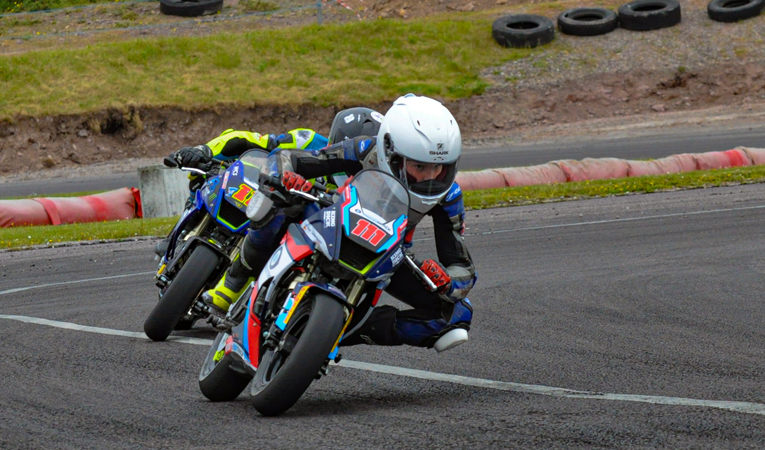 The latest round of the FIM MiniGP Ireland series took place at Cork’s Kartworld circuit on June 19th and it was Lewis Mullen who came out on top, ending a run of three wins for series leader Finnan Wherity. Following three tight heats, Wherity took second spot to maintain his commanding lead in the chase for places in the FIM MiniGP World Final.

The FIM MiniGP Ireland Series is part of the FIM Mini GP World Series for ten to fourteen year olds, with the top two riders from the Irish Series going forward to represent their country in the World Series final in Valencia Spain, alongside November’s 2022 MotoGP season finale.

Wherity arrived in Cork having won the first three rounds of the season and taken five wins from seven heats. Last time out at Whiteriver, Mullen had been his closest rival and it was once again the Ulster rider who put up the strongest challenge in qualifying, taking pole position.

In race one Mullen and Wherity were the class of the field as the pole man and his North Dublin rival battled for the lead. Having swapped positions a number of times it was Wherity who eventually took the verdict with the top two having to be separated by a photo finish. Regular front runner Fionn O’Connell suffered mechanical issues and failed to finish race one, leaving Fionn Stephens to take his first podium of the season. Harry Phayres, Alfie Flynn and Freddie Cooke completed the top six.

Race two produced a third heat win of the season for Mullen as he kept Wherity at bay throughout. Wherity sat behind Mullen for the full race, as these two were well clear of third placed Stephens. The Dubliner looked comfortable as he followed his closest rival home, knowing that he could afford to finish second and still maintain his substantial championship lead. At the flag the top three was the same as race one, with O’Connell recovering to finish fourth while Phayres and Flynn came home fifth and sixth.

The final race of the day produced a very similar result to the first two with Mullen and Wherity as the top two, ahead of O’Connell, Stephens, Phayres and Flynn. The two race wins were enough for Mullen to take his first victory of the season and close to within one point of O’Connell in the battle for the places on the Irish team. O’Connell remains second in the standings ahead of Mullen with Alfie Flynn, Harry Phayres and Fionn Stephens completing the championship top six.

Following four of the six 2022 events Wherity looks secure in top spot as the championship heads back to Mondello Park in August. The Series will then finish off its season in September with its first trip to Bishopscourt, County Down.