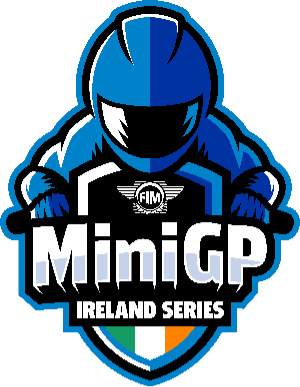 The FIM MiniGP Ireland series is a new series offering young racers between ten and fourteen years old a chance to be part of the FIM’s Road to MotoGP programme.

Currently the ways of getting started in Motorcycle Racing vary around the world. This results in riders coming from different disciplines, with different techniques or styles which can be a disadvantage when competing against riders from other nationalities as they move through the phases of their career. It is the intention of the FIM and Dorna to create an equal and clear platform for young riders all around the world which will provide them with the opportunity to follow the best possible path.

With the creation of the FIM MiniGP World Series, the FIM together with National Motorcycle Racing Federations and Dorna will seek to aid countries in introducing this new step so as to provide riders around the globe with a unique and standardised way to begin their motorcycling career.

As can be seen in the other promotional cup series, such as the red bull rookies and talent cups, having a one-make series is key in revealing true talent at an early stage. Therefore, one key aspect of the FIM MiniGP World Series will be the motorcycle used for the series, which will be the same for each and every country participating in the series.

CHAMPIONSHIP KEY FEATURES
• Ages of participants: 10-14
• Motorcycle: Ohvale GP-0 160
• Circuits: races will be run on karting circuits that meet minimum standards marked by FIM/FMNs who will also set a minimum length.
• Sporting & Technical Regulations: a worldwide standard regulation will be created with minimum requirements that all the cups will have to comply with.
• The champion of every national cup will be given the opportunity to participate in a World Final that will be take place during the week of the final MotoGP event of the season.
• The winner of the World Final will secure a spot in one of the Road To MotoGP programs.