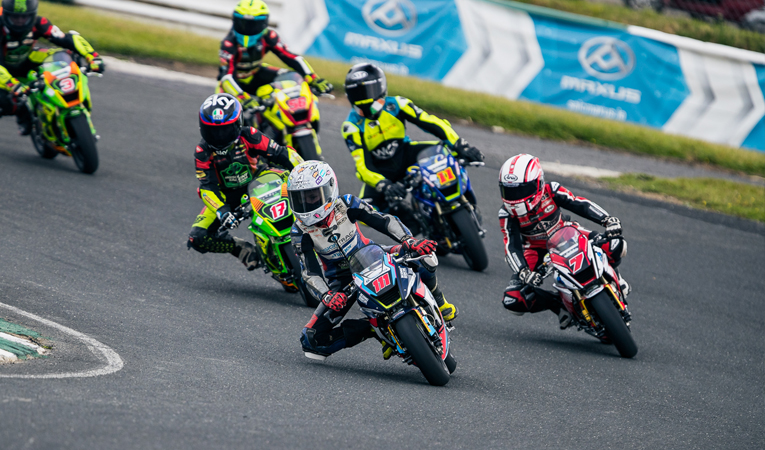 Thirteen year old Finnan Wherity booked his place in the 2022 FIM MiniGP World Final with a solid performance at Mondello Park last weekend. Racing in the FIM MiniGP Ireland series for the second season, the Dublin teenager took three second places over the three heats, picking up enough championship points to secure a place on the trip to Spain in November, for the second year in a row.

In the battle for the remaining World Final qualifying spot, Lewis Mullen moved into pole position with three heat wins, giving him overall victory and moving him into second in the standings ahead of Fionn O’Connell. Ulster rider Mullen, now sits eleven points ahead of his Cork rival and having taken five heat wins in succession looks likely to join Wherity on the Irish team in Valencia.

The FIM MiniGP Ireland Series is in its second year as part of the FIM Mini GP World Series for ten to fourteen year olds. With series running all around the world the top two riders from each will go forward to represent their country in the World Series final in Valencia Spain, alongside November’s 2022 MotoGP season finale.

The second visit of the season to Kildare saw the riders race on a shortened version of the Mondello Park National Track as part of the Dunlop Masters Superbike Championship programme. Wherity entered the weekend knowing that he only needed a steady weekend to secure his qualification and started strongly with second in both qualifying sessions behind Mullen, as County Down’s Alfie Flynn completed the front row.

Race one saw Mullen lead away from the lights with Flynn initially getting between him and Wherity. The Dubliner fought back to retake second before catching the leader and taking over at the front on lap seven. Mullen wasn’t finished however as he re took the lead on the final lap to secure the win from Wherity and Flynn.

The top three was once again the same in race two but this time around Mullen had Wherity on his tail throughout. The leaders swapped places numerous times, but each lap it was Mullen who lead across the line, before he eventually broke clear when the leaders encountered back markers, to take his fourth heat win in a row.

With his progression to the world final virtually secured Wherity was looking to seal the championship with a heat win and gave it his all over the final eight lap race. The champion elect passed Mullen on virtually every lap going through Southside Motor Factors corner but each time lost out in the drag race down the straight to Maxus corner. One last effort on the final lap saw the top two side by side as they approached the flag, but once again it was Mullen who had the advantage at the line, taking a clean sweep of wins by a tenth of a second. Alfie Flynn once again took third with Irish Talent Team rider Fionn O’Connell next up.

With Wherity now confirmed as champion all eyes will turn to the final round, where Mullen and O’Connell will be the only riders still capable of joining him in the Irish team for the World Final. The deciding round takes place at Whiteriver in County Louth on September 11th.