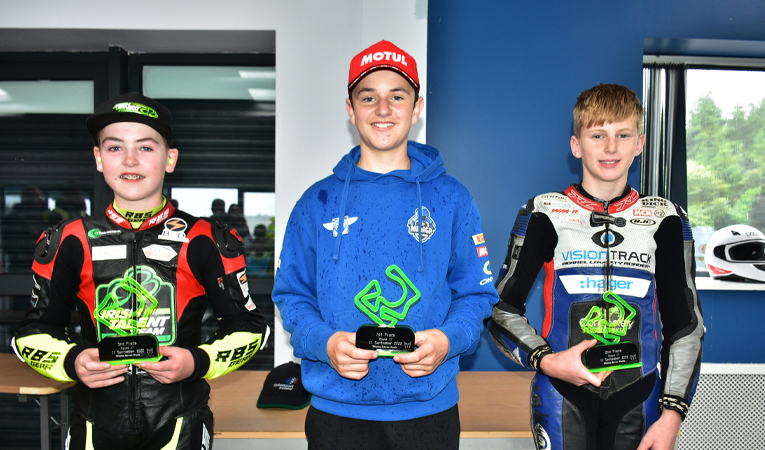 The final event of the 2022 FIM MiniGP Ireland Series took place at Whiteriver circuit in County Louth on Sunday September 11th, but with torrential rain making circuit conditions unsafe, just a single race from the three scheduled was completed. Lewis Mullen continued his outstanding form to make it three wins in a row and ensure his place on the Irish team for the world final in Spain in early November.

Going into the final weekend of the Irish section of the FIM World Series for ten to fourteen year olds, Dubliner Finnan Wherity had already grabbed top spot in the championship, leaving Ulster rider Lewis Mullen and Cork’s Fionn O’Connell to fight over the remaining place on the Irish team.

Luckily for Wherity he could not be caught for the top spot as he was a first lap faller in the opening race, which took place in very wet conditions. The champion elect remounted and worked his way back to third before falling again and leaving Mullen to take another lights to flag win. Mullen’s main rival Fionn O’Connell also crashed out, leaving Mullen to win the shortened race from Fionn Stephens and Freddie Cooke.

With conditions worsening the decision was taken to cancel the remaining two heats and the results were declared on the finishing order from heat one. Another maximum for Mullen brought him to within four points of Wherity and ensured he took a comfortable second in the championship standings. Fionn O’Connell missed out on the trip to Spain as he finished third in the points just ahead of Fionn Stephens.

Champion Wherity and runner-up Mullen will now receive the award of a place on the plane to the FIM MiniGP World Final, which runs alongside the final MotoGP race of the year in Valencia, Spain. The final will take place on Wednesday 2nd and Thursday 3rd of November, with the winner receiving an invitation to race in one of the championships on the FIM’s ‘Road to MotoGP’ programme in 2023.

The World Final will be livestreamed with details of where it can be viewed set for release closer to the event.