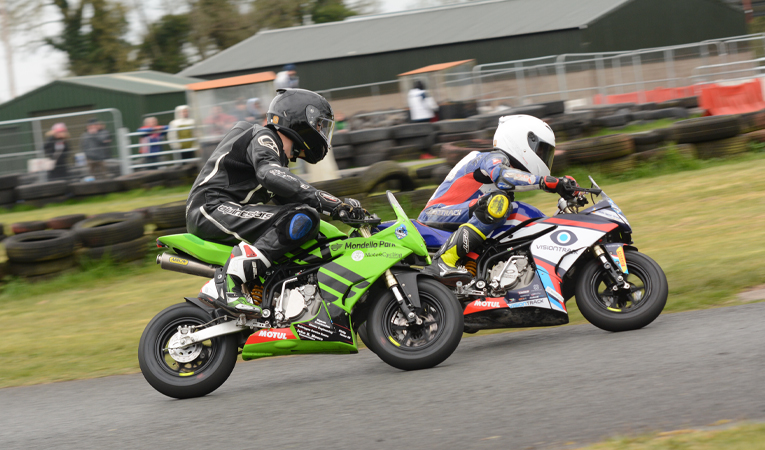 The battle for the chance to represent Ireland in the FIM MiniGP World Final got underway at Athboy Karting Centre in County Meath yesterday (Sunday April 10th), as round one of the 2022 FIM MiniGP Ireland Series took to the track.

Entering into its second season, the series for ten to fourteen year olds racing identical Ohvale MiniGP Motorcycles, kicked off its six event calendar with increased grids and hotter competition at the head of the field. The opening three races produced two winners and a new Athboy lap record as the third placed rider from last season, Finnan Wherity, came out on top ahead of Fionn O’Connell and Former British MiniGP Series competitor Lewis Mullen.

Race one saw a fourteen bike grid line up, with Mullen on pole by less than a tenth of a second from Wherity, with O’Connell next up. Brian O’Malley was best of the newcomers in eighth place ahead of Harry Phares. Mullen made the best start to take the lead from Wherity and pushed hard to open up a gap but overdid it, dropping his Ohvale and handing the lead to Wherity. Wherity then got his head down and set the fastest lap on the fourth tour to break O’Connell’s resistance and take his first race win since last seasons’ Round 2. Alfie Flynn ran with the leaders initially, before dropping back later in the race, but still finished well clear of Fionn Stephens and Freddie Cooke. Phares took the rookie spoils ahead of O’Malley.

Race two again went to Wherity but only after a race long battle with Mullen. Fionn O’Connell led away from the start before the top two worked their way past and then battled all the way to the flag. Mullen couldn’t quite get the better of Wherity, losing out by just over a second, but had the consolation of setting a new lap record. O’Connell once again came home third, ahead of Alfie Flynn and Max Wherity, who recovered to sixth after a bad start. Phayres was once again the best rookie taking seventh place.

The third and final race was the least competitive as Wherity cruised to second place behind Mullen knowing that he had done enough over the previous two races to seal top spot from Round 1. O’Connell and Flynn again came home third and fourth with Phayres completing a hat-trick of newcomer wins ahead of Mondello Park and MCI Scholarship winner O’Malley.

With Round 1 complete Wherity leads the way from O’Connell, Mullen, Flynn and Stephens with Phayres ahead of O’Malley and Mantis Siugzdinis in the Rookie standings. The next round of the Championship takes place on Sunday May 1st at Whiteriver in County Louth.