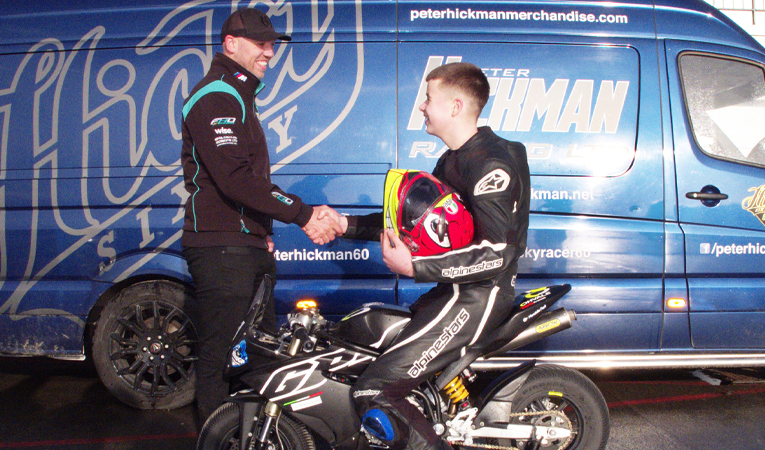 Thirteen year old Brian O’Malley from Westport County Mayo is the chosen rider and he will be supplied with the use of an Ohvale Motorcycle free of charge for the full 2022 FIM MiniGP Ireland Series, courtesy of Mondello Park and Motorcycling Ireland. The scholarship prize will include the use of the bike and provision of free entries and testing, along with help, coaching and guidance from some of Ireland’s top Motorcycle racers.

FIM MiniGP is a championship for ten to fourteen year olds competing on identical Ohvale MiniGP machines. The Irish Championship is one of a number of series running to the same format around the world, with the top riders from each series invited to take part in a MiniGP World Final in Valencia in November. The winner of the world final is then invited to take part in one of the FIM’s junior championships as their introduction onto the ‘Road to MotoGP’ programme.

Brian O’Malley will join the quest for a place in Valencia as a circuit racing rookie. The teenager has been competing in grasstrack racing for two seasons along with his Dad Brendan, who is also a regular on Irish and European Motorcycle Track Days, so the family are well immersed in Motorcycle sport. The Mayo resident’s previous Motorcycle experience, his performance during initial interviews and then on the assessment day, along with his ability to prepare and run the bike were enough to earn him the first MiniGP Ireland scholarship, ahead of the eight other hopeful applicants. On the assessment day, in difficult conditions, Brian impressed the judges; Daire Lowe from Motorcycling Ireland, Fergus Brennan representing Mondello Park and top Irish racer Jack Kennedy, to come out marginally ahead of the other rider who had been shortlisted, thirteen year old Mantas Siugzdinis from Portlaois.

Speaking after the award had been announced Brian said, “I’m privileged to be given this once in a life time opportunity to ride in the FIM MiniGP series. I would like to thank Mondello Park and Motorcycling Ireland for awarding me the scholarship. Also a special thanks to Jack Kennedy, Brian McCormack, Peter Hickman and his team, Simon and Adel, for their coaching and guidance. This is a very exciting time for me and my family and my aim is to learn and progress throughout the season. I am looking forward to meeting other competitors and making new friends.”

Fergus Brennan said “We had a strong response to our first scholarship and following interviews we narrowed it down to two riders who we invited for assessment. On a day that started with a snow covered track and continued cold and damp both Brian and Mantas performed so well that we could not separate them on track. In the end with the help of feedback from Jack Kennedy and Peter Hickman from Ohvale UK, we were able to give the narrow verdict to Brian. We’re looking forward now to seeing how he progresses through the 2022 MiniGP season.”