Following a highly impressive performance, fourteen year old Josh O’Brien from Kildare finished best of the Irish riders and fifth in the world at today’s first ever FIM MiniGP World Series final in Valencia, Spain. Racing against the top three riders from each of ten International championships, O’Brien took a podium in race one and finished the other two races in the top six, to secure a fantastic end to his 2021 season.

The FIM MiniGP Ireland series took place over six events between July and October with the top three earning an invitation to the World Series final, which ran alongside the final MotoGP race of the season. Brian Hamilton, Josh O’Brien and Finnan Wherity were the trio who secured the spots on the Irish team and with it the chance to battle for a place on the Road to MotoGP programme.

The two day event began with practice and qualifying on Wednesday and O’Brien was best of the Irish throughout. Having watched the commitment of the locals in earlier practice groups, the young Irish rider knew he would have to push hard and was not expecting to be on the pace straight away. However, at the end of the four practice runs O’Brien was surprised and delighted to have finished second in three sessions, guaranteeing himself a place in the fastest qualifying group.

Continuing his strong run, he backed up his practice times with fourth place in qualifying, to line up on the second row of the grid for races one and two. The other two Irish representatives were not up to speed quite as quickly and would therefore have to race in the qualifying heats to try to make the points race. In the end the competitive nature of the event meant that neither was able to do enough to join their team mate on the main race grid.

A good start to race one saw Josh retain his fourth place while the trio of Spanish riders battled for the lead. As the race moved in to its final stages one of the leaders crashed out, moving O’Brien up to third, just as he started to run into brake problems. O’Brien’s braking issues put him under increasing pressure from behind, but he managed to hold on through the final few laps to take an impressive podium finish. 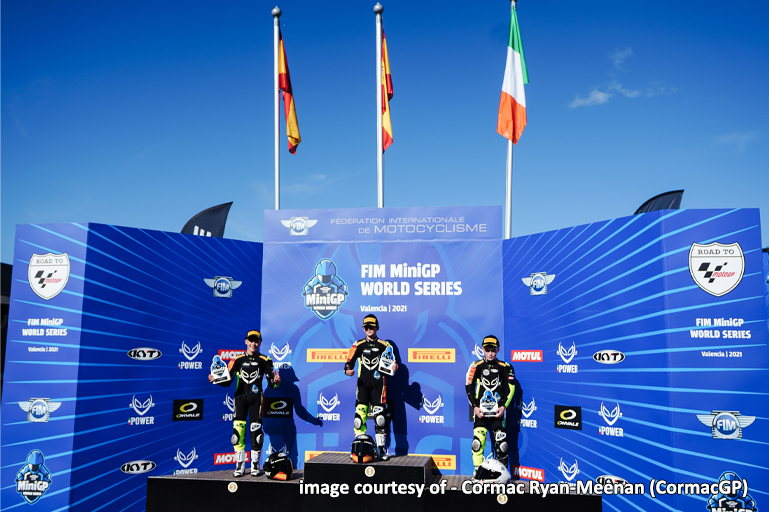 Having started fourth again for race two the sole Irish representative initially sat behind the leading trio. As the race progressed one of the leaders again dropped out leaving the Irish teenager to battle with a pair of Italians for the final podium spot. With his tyres going off and having almost crashed a number of times, Josh eventually had to settle for sixth place, which was still good enough for a front row start for the Superfinal.

The Superfinal saw O’Brien run as high as second in the opening laps but a couple of early skirmishes dropped him back to fourth place. With overtaking very difficult on the tight layout, O’Brien was held up on every lap at the first chicane, where he was visibly the fastest rider on track. In the end, in his effort to overtake at the chicane he pushed too hard and was nearly unseated, allowing one of the Spanish riders to get back past. At the flag the delighted Irish rider was fifth in the race and fifth overall, far exceeding his expectations for the event.

Speaking about his FIM MiniGP experience O’Brien said, “We’ve had a great season and just to qualify for this World Final was an achievement. It’s been a brilliant experience being around the MotoGP paddock and not only meeting but also working with one of my MotoGP idols Brad Binder. I was coming here for the experience and to learn, so I was really happy to be so competitive. To finish fifth, battling with riders from the two strongest Motorcycle Racing nations, Spain and Italy, is a massive achievement and way beyond what I was expecting, so I’m delighted with the way it went. I have to thank everyone who helped me to achieve this result, especially Kelan Smith, without whose help I would not have been racing in MiniGP this season. Also all the people from Ohvale, who provided the bikes, and Brian McCormack and Peter Hickman who gave me so much advice and help over the last couple of days. Finally I have to thank my dad who has supported me so much in going racing and Motorcycling Ireland for putting the Irish series together.”

The FIM MiniGP Ireland Series will now turn its thoughts towards finding their representatives for next seasons World Final, as they formulate plans for the return of the championship in 2022. For news of the new season see the series web site www.fimminigpireland.com.